For my english-speaking friends: The Fight against Wisdom and Power of the Primeval Culture of Egypt: Prologue

I have great pleasure to publish in the near future the version of my book »The Fight against Wisdom and Power of the matriarchal Primeval-Culture of Egypt« translated by Gisela Weber.
I wholeheartedly thank Gisela Weber for this enormous amount of work that she has done for me and for all interested readers in a completely unselfish, unpaid and volunteer way. 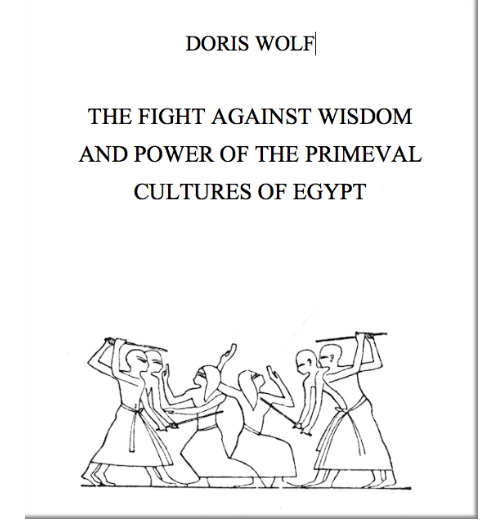 Antiquity-researcher and historians were extremely worried when women began researching their own history in the 1970s, exploring the time before the high cultures with scientific meticulousness and feminine diligence. (See ›Critisism: His Masters Voice‹ as Addenda at the end of this book). The reason is that this is a political issue of the utmost explosiveness, as the result of these studies teaches us that in fact other forms of coexistence existed, and that there was a time when men (female/male) lived together, without war, without violence, without rulers, without oppression, and without exploitation: in the time of matriarchy. Little has been researched and even less published.
Women, in fact, once had the power that they obviously used with so much intelligence and sense of responsibility that they managed to live in peace for thousands of years. There was no dominion of women; they lived equally with the men and the other peoples. Decisions were made democratically, by consensus, and men were given the mandate to represent them externally. Women are perhaps not simply the ›better human beings‹, but they are obviously the wiser ones: »It was the wisdom of the mothers who set boundaries for the male« (Weiler 1995, p. 260). The mothers civilized their sons and men (male) so that one could live with them.
Communication and co-operation, social competence and consideration, characteristics which had once been common to both sexes, otherwise the hundred-thousand-year lasting peace would not be conceivable, are not strengths of the patriarchal man. He is the domineering man, who wants sole, undivided power, and demands submission to his dominion, chiefly of women and children. Women have the ability to assess the effects of their actions and live together in groups, without killing each other. Women did not cause catastrophes and did not believe conflicts could be solved by the sacrifice of their sons and by the use of weapons and violence. For the historians this was hard to take, erroneous, absurd and unbelievable. The world should once have looked different from that what they had imagined and interpreted. A world where women were ›in power‹? Such concepts had to be combated, denied, ridiculed and immediately rejected as unscientific.
Ironically, the writer Joachim-Ernst Berendt remarked, »that a majority of people – especially among school-scientists – still resist the new findings. But our knowledge grows like an avalanche. The school-scientists have long felt their inferiority. Hence their aggressiveness and sensitivity, their inability to talk to the dissenting, who, as well, is always discriminated immediately: this or that theory is ›unscientific‹, this or that does not mean anything. The myth is also true in this regard: Thou shalt not eat of the tree of knowledge« (Berendt, 1985, p. 275). The researcher Merlin Stone calls on women in this sense:

»We need to push aside the curtain of exclusivity that hides the study of archeology and ancient religion, and explore our own past ourselves instead of remaining dependent on the interests, interpretations, translations, opinions, and explanations that have been produced so far.« (Stone 1988, p. 23)

What culture really is, are achievements of the matriarchal period: peace, the most important asset of humanity, a natural equality of all people and both sexes, freedom, and prosperity. Democracy, arts, and crafts, agriculture, stockpiling, specialized craftsmanship, extensive trade relations, a functioning administration, all these were characteristics of the pre-patriarchal era. The creative abilities were cultivated; the art creation took a wide space. And of course one had religious concepts; they were worshiping a Great Goddess and believing in rebirth.
Women’s contributions, what had been created by them since the Neolithic period, had no entrance into historiography. It has either been faded out by the historians or it was annexed to ›high culture‹.

– The first chapter reports the: ›Patriarchal Historiography: What is concealed by the historians‹.

– The second chapter, ›The Matriarchal Cultures of the Old World‹, recalls the characteristics of the Neolithic cultures of the Near East and the Old Europe, which archeology brought to light.

– The conquest of Egypt and those who were the invaders and perpetrators of a terrible catastrophe can be seen in the fourth chapter: ›The concealed Tragedy of an Invasion from the Near East‹.

– How armed conquerors destroyed the peaceful Neolithic cultures of the Near East, and how the upheaval from matriarchy to patriarchy happened, is shown in chapter 5: ›The Destruction of matriarchal cultures and the war against the indigenous peoples‹.

– About the life of the Egyptians under the brutal rule of the conquerors, and the magnitude of the misfortune that plagued them is reported in Chapter 6: ›The Pharaonic Reign of Terror‹.

– Who and what blocked the way of the patriarchal tyranny, and who and what had to be eliminated, we find out in the 7th Chapter: ›The War against the Power and the Wisdom of Matriarchal Culture‹.

– Under what, particularly women have suffered since the beginning of the patriarchy, we read in Chapter 8: ›The Consequences of Patriarchalization for Women‹.

– The attempt to eliminate the religion of the goddess, we see in Chapter 9: ›The Fight against the Religion of the Great Goddess‹.

– How patriarchal myths and the invention of male gods were instrumentalized against the earlier religion, is exposed in Chapter 10: ›The Role of Religious Myths in Patriarchal Power-taking‹.

When I visited Egypt for the first time in 1989, I knew nothing about its history and culture and had no idea that this harmless holiday trip would entail a long period (more than 30 years until today, 2019) of fascinating research. I only wanted to learn a few basics as I delved into glossy illustrated Egyptian books, stumbling upon the astonishing statement of a renowned Egyptologist (woman) who claimed: »Egypt’s high culture jumped from the prehistory like the chick from the egg, endowed with all potencies« (Emma Brunner-Traut, 1987, p. 10). I was stunned and became curious about the mysterious birth of Pharaonic Egypt and on Egypt’s Prehistory. My curiosity aroused for the mysterious transition from prehistory to Egyptian high culture. 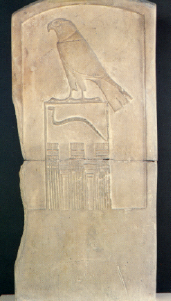 Only a few months later, in the Louvre, I stood before the most important testimony of this enigmatic period, the marvelous Stele which is attributed to a ›King Wadji‹ (King Serpent). In the intermediate time, I had read the epochal work of Merlin Stone, ›When God Was a Woman‹, which gave me a totally new perspective, as I never, knew it before. Suddenly I was able to look at history and religion from a new, more critical side, and to think autonomously, for myself. So I stood before this Stele of a ›King-Serpent‹, and it went through me like a flash of lightning: I realized, that something was extremly wrong in the historiography of Egyptology. The image on which a serpent is depicted in a palace, over which the Horus hawk sits enthroned, irritated me indescribably. I had learned from mythology that the serpent always stood for a femaleness; so it should have to be the Stele of a QUEEN and not of a ›King-Serpent‹?
I had also read about the errors and confusions of archaeologists and Egyptologists on the wrong attribution of two of the largest graves ever found in Egypt, which first of all, had obviously been ascribed to kings, and later, it had to be admitted, that it was the tombs of Queens. Therefore my skepticism was appropriate, and in the course of my work, it turned out as absolutely justified (see chapter 7). Now I was no longer to be stopped. My research began. I worked with boundless disconcertment and growing indignation through hundreds of books and articles, slowly becoming aware of the extent of the deceptions and walloping history-frauds with which the people were duped by the patriarchal historians and theologians.
This book is the result of twenty years of intensive research. My work is quite consciously based on my personal, which is a subjective-female point of view that I understand as a supplement, or rather as a correction, of the male standpoint of school science. I used the knowledge that is accessible to all, but sometimes I drew other conclusions from it.
I neither was fascinated neither by the Pharaohs nor by their wars and conquests, neither by their riches nor by their colossal buildings because about that already were written thousands of books. I was interested in what was left in the darkness; the unexpressed, the inexplicable, the passed-over, the slightly scattered, a single sentence in thousands of sentences, which at first glance appeared insignificant and incidental, hidden in the proud epilogues. In the course of my research gradually crystallized a quite different Egyptian image than that we learn from the schoolbooks about the Egyptians, and which is generally similar to the experience of today’s tourists who see the picture book beauty of the country from fully air-conditioned buses and luxurious hotels, the ›idyllic‹ poverty, the ›unscathed world‹, the artificial façade: the colossal monuments of the rulers and the testimonies of their political and religious propaganda. We have little to guess about the hidden life and the suffering of people who did not (do not) belong to the ruling class, about their distress and poverty, the arbitrariness of the police and the officials, the tyranny and oppression.
With this book, I will show this other side. I am aware that this work can only be a momentary impression and cannot be concluded for a long time. I fully agree with the Egyptologist Donald B. Redford, who said:

»When I start with a course on Ancient Egypt, I always tell my students that –
before the end of the semester – someone will have discovered something that will change our world view.«
(Donald B. Redford)